Auto safety features have evolved considerably since an experimental steam-powered car killed a scientist, Mary Ward, in Ireland in 1869. Ward has the dubious distinction of being the first known car crash victim. Back then, steam cars were seen as an eccentric hobby, and safety features were unheard of. Just as auto body shops have become more technologically advanced over the years, so too have the cars themselves. 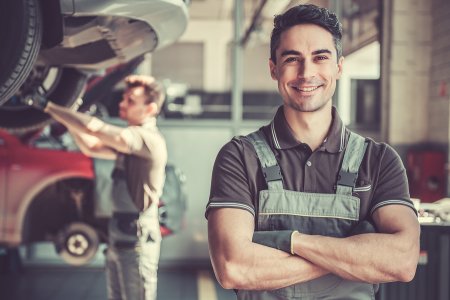 Driving pioneers had to use a hand-crank to start their cars, and to stop them, most of the drivers used a lever system to apply a block of wood to the wheels. This primitive brake became virtually useless when rubber tires were introduced. The need for safety improvements in general and better braking, in particular, became clear in 1899 when North America’s first recorded death by car occurred. Henry Bliss, a realtor in Manhattan, disembarked from a streetcar and was quickly struck by a taxicab. Bliss suffered massive internal trauma and died the next morning. After Bliss’ death, manufacturers and the public became keenly aware that changes were called for. In 1922, the first four-wheel hydraulic brake system was installed in a car, but it wasn’t until 1949 that the first model received standard disc brakes.

In 1930, Ford began requiring all models to have a “safety glass.” This was a big year for auto safety, as it’s also believed to be the first time that safety proponents called for installing seat belts. Padded dashboards were also recommended. Here’s a timeline of other major milestones:

Of course, not all inventions worked. There have been plenty of failures along the road. In 1907, the O’Leary Fender was invented. It was a mesh-like device that attached to the front of a car for the purpose of pushing pedestrians out of the way. Needless to say, it didn’t catch on. Another ill-conceived idea was a padded crash compartment, into which passengers were supposed to crawl when a crash was about to happen.

Here at Michael J’s Body Shop, we have all the high-tech collision repair equipment needed to do flawless dent repairs and bumper repairs in our San Jose location. We even offer rental car assistance! Call us at 408-279-2070 with any questions you may have.

A car’s suspension system connects the body of the car to the wheels and helps them work together by maintaining motion between them. The…

The old advice was to keep children in rear-facing car seats until they were at least 12 months old. This is why you might hear some well-intentioned…